in Travel
Reading Time: 2 mins read
A A 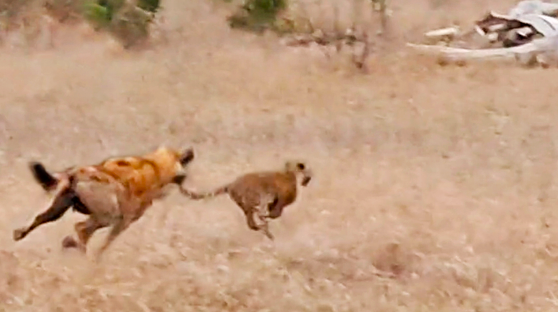 The leopard cub runs for its life from a hungry hyena. With its chaser breathing down its neck, the cat darted up a tree to safety.

Saved by the tree!

A leopard cub managed to escape a life-or-death situation when a hungry hyena caught its scent and discovered its hiding place in the Kruger National Park.

In a video shared by Latest Sightings, the cub, which was left by its mother in a bush, made a life-saving move to evade the chasing hyena by climbing a nearby tree.

The video was captured by Moosa Varachia while on a safari in the famous park.

Varachia described the sighting as an “emotional roller coaster”.

“We had just had an incredible sighting of a male leopard at the N’waswitshaka waterhole and it was time for the dreaded drive to the gate, which brings the end to the day.

“We stopped and a young leopard was sitting in the dense bush. We took some photos and videos and were just about to leave when I looked up and saw a clan of hyena approaching. I knew that this situation may not end well for the leopard cub,” said Varachia.

Can an avo a day keep the doctor at bay?