in Travel
Reading Time: 5 mins read
A A 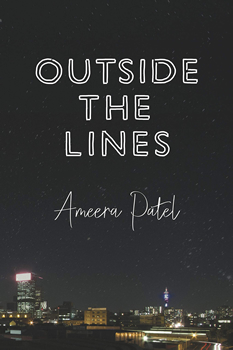 Ameera Patel’s ‘Outside the Lines’ is a tense, literary thriller set in Johannesburg.
Image: Supplied

Ameera Patel is very talented. In 2016 she was named as one of the Mail & Guardian’s Top 200 young South Africans. She is a Naledi award-winning actor and a writer.

Starting with a BA in theatre and performance, she went on to earn a distinction for a Masters in creative writing. Patel is the author of award-winning plays and a film series. Her debut novel Outside the Lines has been published in SA, Germany, and North America.

Set in Johannesburg, Outside the Lines features as diverse a collection of characters as one could hope to meet. Frank and his daughter live in a modest suburban house, but there’s been little meaningful contact between them since Cathleen’s mother died.

Cathleen’s life now revolves around drugs and obtaining money for them. Inevitably, she falls for a trap that leads to her being kidnapped. Domestic worker Flora also lives in the house and has empathy for Cathleen, but no real authority.

The house is being repainted by a Zimbabwean, Runyararo, who is in the country illegally and whose situation forces him outside the lines.

Then there is Farhana, who comes from a strict Muslim family, but whose boyfriend is a drug dealer.

This heady mixture of characters meshes to a tense, literary thriller.

Patel talks more about it in this interview for The Big Thrill.

What attracted you to the premise of the novel?

Initially I was interested in the idea of fear versus phobia. When are our fears legitimate and necessary to keep us safe, and when do they become obsessive and paralysing, preventing us from seeing the truth?

Johannesburg is known as a crime hotspot, and people live in a state of fear. Through Outside the Lines, I wanted to explore what happens when this fear becomes a phobia, and we lose our ability to think rationally. We make dangerous, impulsive choices because we are reacting from a heightened emotional state, as is the case with Frank when he comes face to face with Runyararo towards the end of the novel.

I also wanted to explore this melting pot of a city where we live among such a variety of people, some of whose stories we never open ourselves to hearing.

The theme of family and parenting was interesting to me, especially when I considered the role of the domestic worker or “nanny” in middle class homes. As a hangover from apartheid, this type of labour is cheap and often exploited. These women tend to raise the children of the home but aren’t given the power to discipline the children, and at a certain point the children grow up and start to see the domestic worker as an employee of the family rather than a parental figure.

Most SS crime fiction is set in Cape Town. The nature of Johannesburg and its diversity is a powerful setting for your novel. Did you set out to explore the city in this way, or did it naturally evolve with the narrative?

I was born and bred in Johannesburg so it’s what I know, and it was far easier to write about because of this. I also wanted to explore different aspects of the city. While it is known as a dangerous city, it is a big part of who I am and how I identify in the world. I wanted to show Johannesburg as I know it: a place to grow up in, to fall in love in, to party in, and a place full of fantastic stories and people. I find Johannesburg as diverse as the society that occupies it, and I definitely wanted to explore it as a fully rounded creature in its own right.

The story is told in interweaving chapters from the points of view of each of the major characters. Thus we are able to see how each is seen by her or himself as well as by all the others. All are flawed, but this approach enables us to develop sympathy for them. Was that an objective of choosing this style to tell the story?

Definitely. I think as human beings we are all flawed, and those flaws tend to make us more relatable than our strengths. As an actress, something I always look for in my characters is what their flaws are. What is the thing that makes them human? By showing the characters’ own perception of themselves and then having other voices add to this description, it helped me to build complex characters without making them too self-aware of themselves or so wonderful they are hard to believe. Once I identified their flaws, I could allow them to make bad decisions based on these, making the story far more interesting, I hope.

Cathleen falls foul of a drug gang. Runyararo and his friend are sucked into their orbit by the promise of money. Farhana’s boyfriend is a dealer, which she hides from her strict Muslim family. But the kidnapping and robbery involves them all. There seems to be an inevitability about it. Is everyone, in a sense, “outside the lines”?

The short answer is yes. No-one in the world plays fully within the lines. Perhaps Flora, the domestic and mother figure in the book, has the strongest morals and keeps herself bound within her moral framing. But she doesn’t draw the lines between right and wrong with as much judgement for her own son as she does with Cathleen.

While most of the characters find themselves “outside the lines,” I think it’s what gets them there that is most interesting. Cathleen is at a loss after her mother’s death and turns to drugs as a coping mechanism, and while she makes many bad choices, she is still a young girl desperate and grieving. Runyararo is desperate to make ends meet in a city that is not friendly to foreigners. Zee, Farhana’s boyfriend and Flora’s son, finds himself battling the capitalist struggle to better himself in terms of class and social status. All of these very different characters find themselves living “outside of the lines” for different reasons, but the idea is that it could happen to any of us.