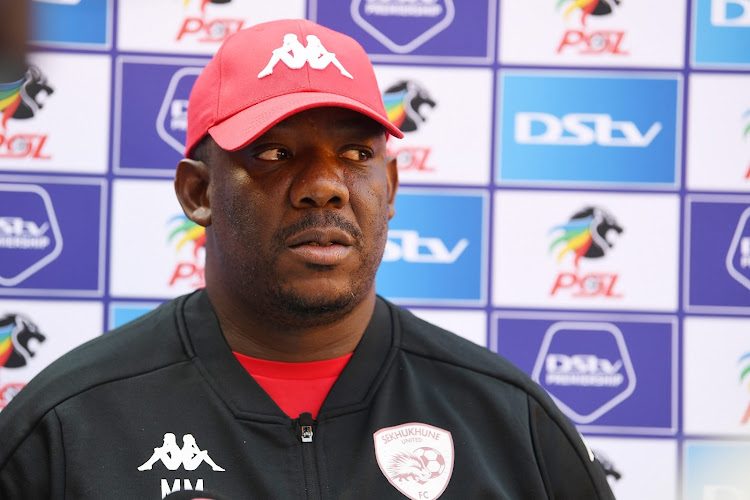 The match may be in doubt, but Sekhukhune United coach MacDonald Makhubedu says his team have been preparing for a “test of character” for their DStv Premiership match against Kaizer Chiefs at FNB Stadium on Sunday (kickoff 6pm).

Chiefs, who unsuccessfully appealed to the Premier Soccer League (PSL) last week for all their December league matches to be postponed after an outbreak of 36 Covid-19 cases at Naturena, have yet to make clear if they will manage to scrape together a match squad to meet Sekhukhune.

This after Amakhosi were unable to honour their fixtures on Saturday against Cape Town City at FNB and on Wednesday against Lamontville Golden Arrows on Wednesday.

However Makhubedu — whether for the purposes of not leaving anything to chance, or any sense that the match might go ahead — appears set on preparing his second-placed charges in earnest for the fixture.

The coach said he will look to his players to show character to bounce back from their 1-0 defeat away against Marumo Gallants on Wednesday — just promoted United’s second defeat of an outstanding opening half in their first top-flight campaign.

“It’s going to be a big one, and a good motivation for everyone who plays for us, and the technical team too,” Makhubedu said.

“We lost at Marumo Gallants last week so it’s a test of character on how we’re going to come back. It’s a big one, but we are also in the big league and we will give Chiefs the respect they deserve but we want to do well on Sunday and try to maintain our log position, try to be in the top three.

“But we know it’s never going to be easy against Chiefs. We anticipate a good game and our preparations have been going well.

“We are going there to fight and I think we will do well on Sunday. If we want it we’ll get it. If they want it they might get it. But it’s going to be a good game of two good teams.”

Attempts to reach Chiefs on Friday afternoon on whether the club will be able to honour Sunday’s fixture were unsuccessful.