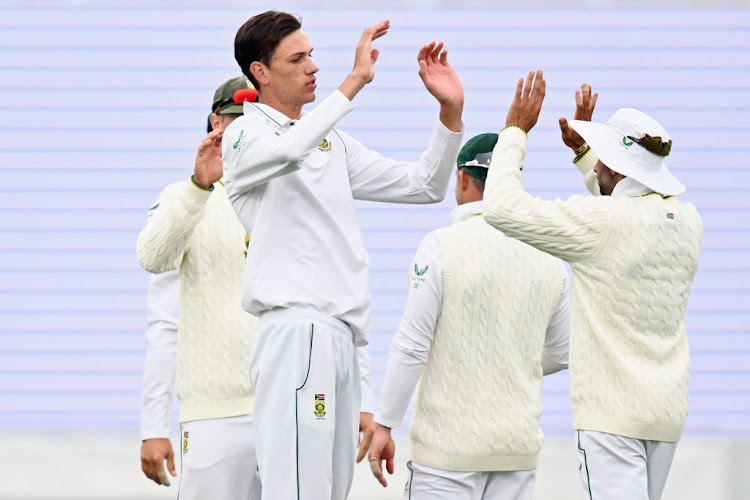 Marco Jansen of SA is congratulated by teammates after dismissing Henry Nicholls of New Zealand during day two of the Second Test Match in the series between New Zealand and South Africa at Hagley Oval.
Image: Kai Schwoerer/Getty Images

New Zealand were under pressure at 157 for five at stumps, still 207 runs short of SA’s first innings total of 364.

De Grandhomme was 54 (not out) and Daryl Mitchell on 29, their unbroken 66-run partnership having halted SA’s march on a chilly, overcast day at Hagley Oval.

“For us now it’s about trying to put pressure back on them and see what happens tomorrow.”

The Proteas, 1-0 down in the series, lost all three of their reviews seeking extra wickets but would be well pleased with their work.

“Tomorrow we’re just going to go hard, try to make them play as much as possible and try to force them to make a mistake because it is quite a good batting wicket,” said Jansen.

“The plan for tomorrow is just to be as tight as possible.”

Rabada quickly removed both New Zealand’s openers, with skipper Tom Latham caught down the leg-side for a duck, and Will Young nicking behind for three. Jansen reduced New Zealand to 51 for three, having Devon Conway caught behind for 16.

Mitchell lived dangerously through his 78 balls, surviving two lbw reviews off the bowling of all-rounder Wiaan Mulder and a third in the final overs off third seamer Lutho Sipamla.

In-form batsman Henry Nicholls scored a fluent 39 for New Zealand but trudged off ruefully after hitting Jansen straight to a trap at backward point and wicketkeeper Tom Blundell became Rabada’s third victim when bowled for six.

SA started the day in a position of strength at 238 for three but lost four wickets in the morning, the spoils shared by Neil Wagner and Matt Henry.

It took tail-enders Jansen (37 not out) and Keshav Maharaj (36) to wrest back the momentum with a valiant 62-run partnership for the ninth wicket before New Zealand’s towering pacer Kyle Jamieson wrapped up the innings.

New Zealand, who thrashed the Proteas by an innings and 276 runs in the first meeting in Christchurch last week, need only draw the match to claim their first ever series win over SA.

Victory, however, would see the Black Caps dislodge Australia as the world’s number one test side, while shoring up their World Test Championship defence with maximum points.

Young Lions stay in the fight

Young Lions stay in the fight