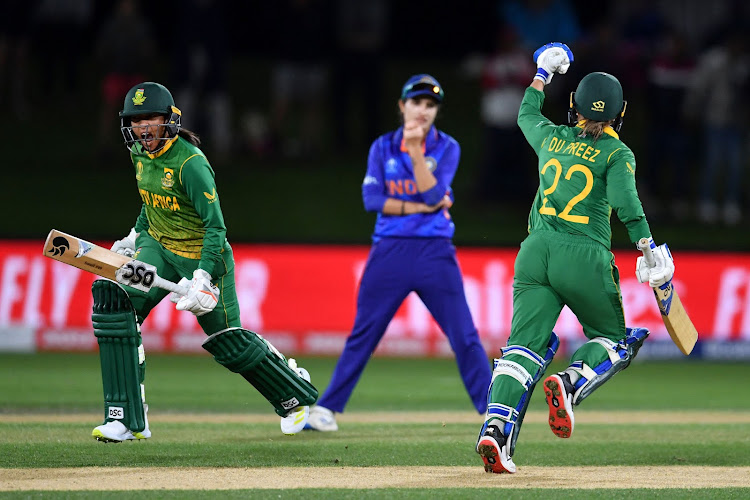 SA warmed up for their semifinal clash against England successfully chasing down the second-highest total in the history of the ICC Women’s Cricket World Cup to knock India out of the competition with a nail-biting three-wicket win in Christchurch, New Zealand, on Sunday.

In a dramatic finish, an SA wicket was taken off a no-ball and then, with the Proteas needing a run from the last ball of the match at Hagley Oval, Mignon du Preez flicked a two over midwicket.

India, who needed to beat SA to book their place in the last four, posted 274/7 in their 50 overs after they won the toss and put the Proteas in to bat first.

Shabnim Isamail and Masabatha Klaas continued their great form with two wickets apiece while Ayabonga Khaka and Chloe Tryon each contributed a wicket.

SA finished second behind unbeaten leaders Australia having won five of their seven pool stage matches, with their clash against West Indies washed out.

The Proteas will play defending champions England in the second semi in Christchurch on Thursday while Australia will do battle with West Indies.

SA will be determined to go beyond the last four after they were outclassed by hosts and eventual winners England in the semifinals of the 2014 tournament.

Du Preez said her teammates supported her through a difficult period.

“I’ve been very fortunate, the girls have supported me throughout even though I didn’t start well with the bat. But to be able to do it for us today was special,” Du Preez said after the match.

“It means the world. Thanks to all the fans, couldn’t have done it without your support.”

“We’re happy for Mignon to finally get that 50. It’s been a tough tournament for her but to see her flourish like this today just makes all of our hearts happy,” said Luus.

“I think this is how the semifinals are going be. It won’t be an easy match and today’s game was great preparation. To get a win on top of that is very good and we hope to take the momentum forward.”

Sarah Bullen on writing ‘Love and Above’