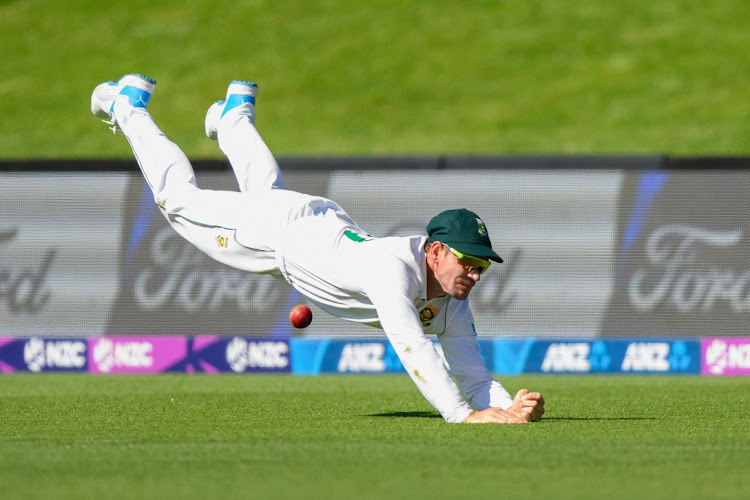 Sarel Erwee of SA drops a catch on day two of the first Test against New Zealand at Hagley Oval in Christchurch, New Zealand on February 18 2022.
Image: Kai Schwoerer/Getty Images

The only thing on the mind of Proteas opener Sarel Erwee is to right the wrongs of the first Test.

SA suffered a heavy innings defeat to New Zealand last week, where they scored only 206 runs in two innings as they were dominated in the batting, bowling and fielding departments.

They meet again in the second and final Test at the Hagley Oval in Christchurch with SA looking to avoid another defeat and the Black Caps going all out to seal their first Test series win over the Proteas.

After a period of self-introspection, Proteas players are back at training and Erwee said they want to correct the mistakes and improve as individuals and as a team.

“Physically you try to stick to what is called active recovery and mentally you go through your game plans and think about where you went wrong and what you did right,” he said.

“We don’t want to overthink things too much, but at the same time we want to correct the mistakes we made as a unit and as individuals in the first Test.”

To be able to bounce back, Erwee said they must adapt to conditions.

“It is about adapting to conditions and putting our best foot forward, that’s basically it. We face tough conditions back home and it’s a case of adapting and watching the ball.

“Lots of things have been said by a lot of people, but it is about adapting early on and making peace with the conditions.”

The second match will be played at the same venue and Erwee expects conditions to be similar to the first Test.

“Not much is going to change in the second Test, we have looked at the conditions again and it seems similar. We have had a chat about it and we are preparing well.