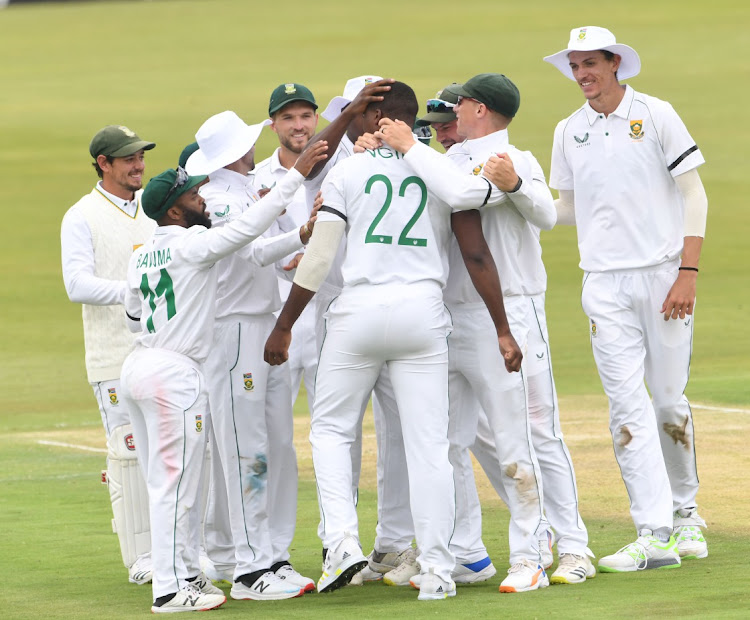 Proteas players celebrate the wicket of India’s Mayank Agarwal during day one of the Boxing Day Test at SuperSport Park on Sunday.
Image: Lee Warren/Gallo Images

Lungi Ngidi claimed two successive wickets during the second session of the Boxing Day Test at SuperSport Park as SA launched a fightback after a strong start by India.

Openers KL Rahul and Mayank Agarwal successfully negotiated the first session where India ended on 83/0 after 28 overs but Ngidi wreaked havoc during the opening stages after lunch with two quick wickets.

He found the much needed breakthrough during the 41st over with the two wickets of Agarwal (60) and struggling Cheteshwar Pujara who returned to the pavilion without scoring.

The dismissal of Agarwal was only confirmed by the television umpire after a successful review by Ngidi and it was followed by that of Pujara in the next ball when he was caught by Keegan Petersen at short leg.

Pujara’s dismissal was the second time in Tests he was out for the first ball and it turned out that Ngidi had a hand on those two occasions as he run him out here in Centurion in 2018.

The wickets of Agarwal and Pujara left Ngidi on a hat-trick but his third ball went past outside off-stump and it was left alone by Indian captain Kohli as the Proteas began to fight their way back into the game.

Before Agarwal was dismissed, he was part of a 117 partnership with KL Rahul as they frustrated the Proteas bowling attack of Kagiso Rabada, Lungi Ngidi, debutant Marco Jensen, Wiaan Mulder and spinner Keshav Maharaj.

They went to the lunch break in command with openers Agarwal and KL Rahul having successfully managed to negotiate the first two hours of play without losing their wickets.

After the two wickets, KL Rahul (68) and captain Virat Kohli (19) went on a rebuilding mission and they were on a promising partnership of 40 off 99 before tea was called.