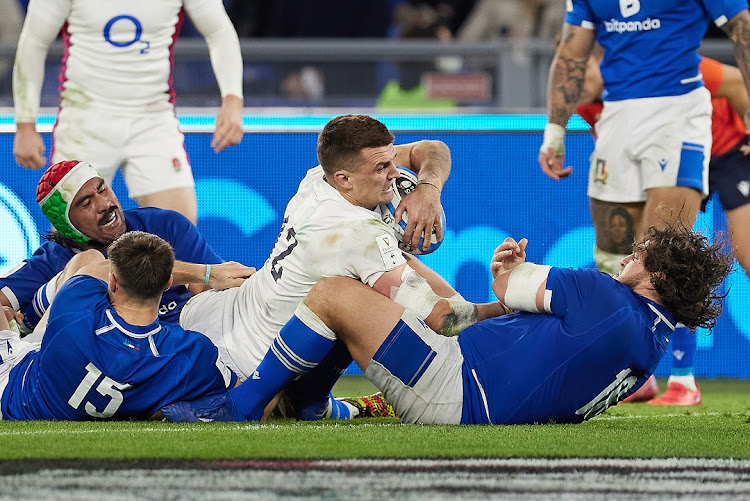 Henry Slade of England competes for the ball with Edoardo Padovani, Epalahame Faiva and Tiziano Pasquali of Italy in the Six Nations match at Stadio Olimpico in Rome, Italy on February 13 2022. Italy’s 33-0 defeat extended their losing streak to 34 in the Six Nations.
Image: Emmanuele Ciancaglini/Ciancaphoto Studio/Getty Images

There are no plans to change the participants of Rugby’s Six Nations, the organising body said in a statement, amid media reports that SA are set to replace Italy in the tournament.

British newspaper the Daily Mail reported this week that SA were keen to realign with northern hemisphere rugby, and would enter the Six Nations in 2025 at Italy’s expense. However, that story was denied.

“Six Nations Rugby, comprising the six unions and federations and CVC, wish to confirm that they are not entertaining any discussion nor developing any plans to add or replace any participating union,” the statement released on Friday read.

“All its energy is focused on the current strategic discussions regarding the July and November international windows and structure of the global season, and to ensure a positive outcome for the development of the game.”

Italy’s 33-0 defeat by England in Rome last weekend extended their losing streak to 34 in the Six Nations, a run that stretches back to 2015. They face Ireland in Dublin next Sunday.

Former Italy captain and current head coach of Benetton Treviso Marco Bortolami warned that bringing in SA would have severe consequences for rugby in the country.

“It would be a disaster,” Bortolami told the Daily Telegraph. “For exposure, the Six Nations has always been the highlight of the season for Italian rugby.

“If you want to kill rugby in Italy that would be the best way to do it.”

Elgar on SA's dismal performance: 'I am trying to wrap my head around it'

Elgar on SA's dismal performance: 'I am trying to wrap my head around it'