My SA friends told me to hit as hard as possible, says Spanish co-leader 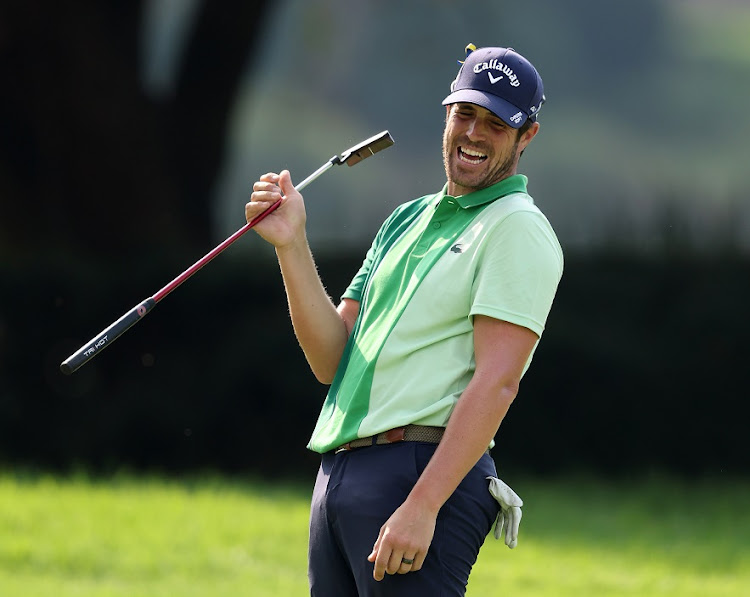 Nacho Elvira of Spain reacts to his missed putt on the 18th hole on day one of the MyGolfLife Open at Pecanwood Golf & Country Club in Hartbeespoort on March 10 2022.
Image: Warren Little/Getty Images

Nacho Elvira dished up a stunning run of seven straight birdies on the back nine to march to a four-way share of the first-round lead of the $1.5m MyGolfLife tournament on Thursday.

The 35-year-old veteran finished with an inward nine of 29 as he carded a 10-under-par 62 at the Pecanwood Golf and Country Club to lie level with South Africans Hennie du Plessis and Tristen Strydom and Englishman Ross Fisher.

The field attacked this Jack Nicklaus-designed layout, with 74 players were four-under par or better.

The top 19 fired 149 birdies between them, along with five eagles. Seven carded bogeys.

It was like Christmas out there, and local veteran Richard Sterne, in a three-way tie for sixth spot on eight under, was predicting a sub-60 round before the end of the tournament. “Someone’s going to be able to shoot 59 this week,” said Sterne, who was a regular when the course first opened in the late 1990s.

Pablo Larrazábal, one shot behind the leaders on nine under, was another Spanish fly in the South African ointment that covered most of the top of the leader board.

Elviro said he had been given advice from his SA pals on the tour. “I have a lot of South African friends, I love them to death and they told me to hit as hard as possible here and I certainly did.”

His longest putt for birdie was 10 foot, on the front nine, and in his seven-stretch the longest was just a few feet. On the 18th his putt for birdie — and the outright lead — stopped on the lip.

Fisher, a fan of SA courses, started with an eagle on his first hole, the par-five 10th, splashing out from the bunker.

He moved into the sole lead on 11 under after his 16th, but then bogeyed the par-three eighth after landing in the bunker.

Strydom’s bogey five on the 11th also came via a sand trap.

Local resident Du Plessis used his local knowledge to take the early lead in the morning.

“This course is forgiving and I know the greens. If you give yourself a lot of opportunities you can shoot low on any course. It just makes it a little bit extra special it’s my home course.”

Driving well was important, added 25-year-old Du Plessis, whose only win on the Sunshine Tour to date came in 2017. “If you hit it long and you hit it on the fairway you’re going to have a lot of opportunities.”

But anything wayward was at risk of being punished, especially after the recent rain. “The wet conditions, you can pick up mud balls easily.  If you don’t hit the fairways you might have a couple of awkward situations.”

Du Plessis, who had a one-minute buggy ride to get home after his day, recalled he once shot 61 playing off the club tees here, though on another occasion he was on track for 59.

JC Ritchie, on eight-under with Sterne and Germany’s Nicolai Von Dellingshausen, believes that if the weather plays ball the winning score could range from 24 to 30 under par. Rain is predicted on Friday and Sunday.

“I think the weather is probably going to play the biggest role,” he said. “The only the thing that can really affect the scoring for us is bad weather.

“The greens are good, they’re soft, the golf course is very receptive so it doesn’t really matter where they start putting the pins, the boys will manage to find birdies.”

Ritchie, with eight wins, including two this year already, is happy with his form.

“I’ve been driving the ball really nicely the last seven weeks and that’s been able to give me a lot of opportunities,” said the 28-year-old. “All the par-fives were always in play and coming out of the fairways with wedges, you sort of expect to make a couple of birdies.”

“It’s huge for us,” said Ritchie. “Our country has so many great players, I think we deserve to have a couple more players out in the DP World Tour so to have these opportunities where we get the chance to win playing rights is amazing.

“So hopefully one of us can get it done.”

Botox, fillers … and now exilis? What is it and how does it work?

Botox, fillers ... and now exilis? What is it and how does it work?