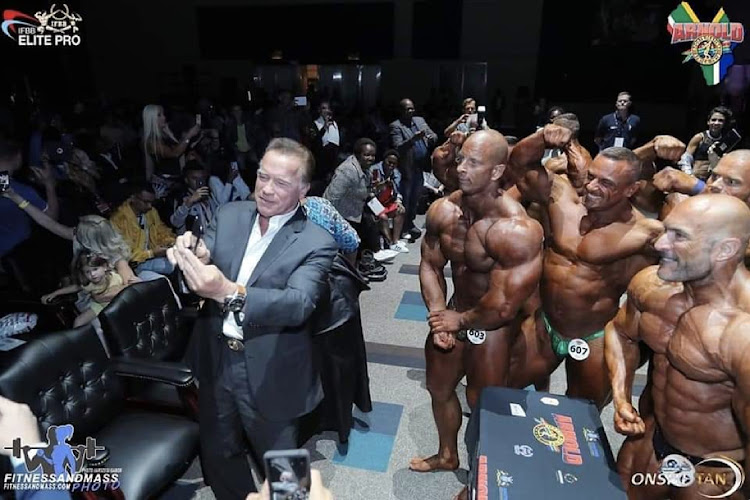 Arnold Schwarzenegger with bodybuilding participants in the 2019 Arnold Classic Sport Festival Africa in Johannesburg. The multi sports event is set to make a return after a two year absence.
PIC: Supplied.
Image: Supplied

The co-founder of the Arnold Classic Multi-Sport and Arts Festival Africa, Wayne Price, says they are excited about the event making a return on June 3-5  at the Gentle Giant Tent City in Ruimsig in Roodepoort after a two-year hiatus due to Covid-19.

Many sporting events were canned when the pandemic took the world by storm, and the Arnold Classic Africa was no exception.

The event had been running for four years, growing from strength to strength with an increase of sporting codes, arts and participants every year. Even American celebrity Arnold Schwarzenegger, who introduced the concept, noted the growth.

Price spoke about the devastation the pandemic had caused and why they were  excited about the event’s comeback next month.

“It was frustrating for a lot of event organisers the past few years. After four years of running the event we were excited about 2020 and beyond. We all learned through this period,” said Price.

“The reason we are excited about having the festival back is that we have an exciting sports community, there’s a great passion for sport in the country.

“We’re excited to see the response of all the participants, organisers and sponsors who have committed. It’s going to be something different. There’s going to be lots more fun and festivities for everyone.”

With less than a month until competition time, selection for participants has already started, with many going to trials and competitions to secure their places.

There’s an expected healthy number of participants, with over 6,000 already registered. Athletes will be taking part in sporting codes such as aerial sport and arm wrestling, martial arts, basketball and the main draw, bodybuilding, and more.

The festival founders are hoping to eclipse the numbers they had in 2019, the last edition of the event. Price elaborated on the status of participation.

“In 2019 we closed off the season of the Arnold with 85 activations and had more than 20,000 participants. For the opening of this year’s event we have close to 50 activations taking place. Currently, in the register we have 6,700 participants in the initial stage,” said Price.

“A lot of the event organisers have run preliminary qualifications to identify athletes that can participate in the Arnold platform. I know several events have been running over the past months.”