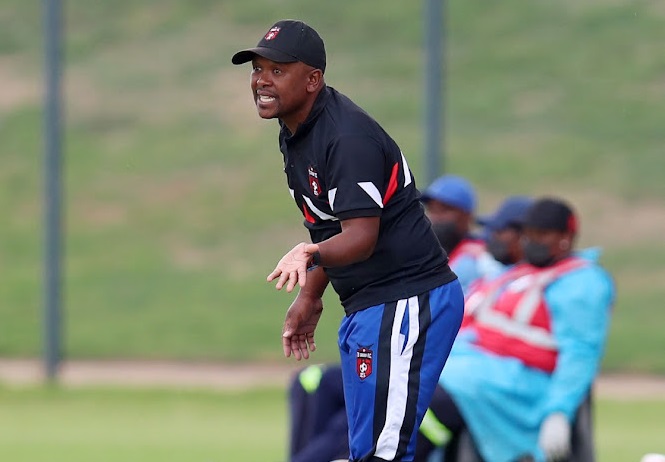 Ashley Makhanya, coach of TS Galaxy, is not focused on the title race.
Image: Muzi Ntombela

In the doubleheaders they have played with Sekhukhune over the past two matchdays, TG Galaxy had an aggregate score of  8-1. The back to back wins have seen them climb up to fifth place on the table.

“Obviously, as the season progress the work being done shows, players improve individually and as a team; there’s been improvement in the team and individuals,” said Makhanya.

“That’s what we appreciate, as we play and train, players get better and they achieve consistency. That’s something difficult with young players; it takes time but also you have to work consistently regularly.

“With a small group, you’re able to do more and help the individual, you get a lot of repetition and players will improve and have clarity in how you want the team to play and each individual to apply themselves.

“The attitude, desire and willingness of the players to get better, is fundamental. People get better because they have a desire to get better. If the training is good and consistent, with the right mentality, then they are going to get better,” Makhanya.

TS Galaxy are still in the mix for the title but that’s not the main objective for Makhanya and his coaching staff. Their main goal for the season is to see members in their squad get promotions to the first team.

“We are hoping that one day this season they can make the debuts, the head coaches are happy with them. That is progress,” Makhanya said.

‘First People: The Lost History of the Khoisan’ is an invaluable read

Four things Banyana must get right against Algeria

Four things Banyana must get right against Algeria