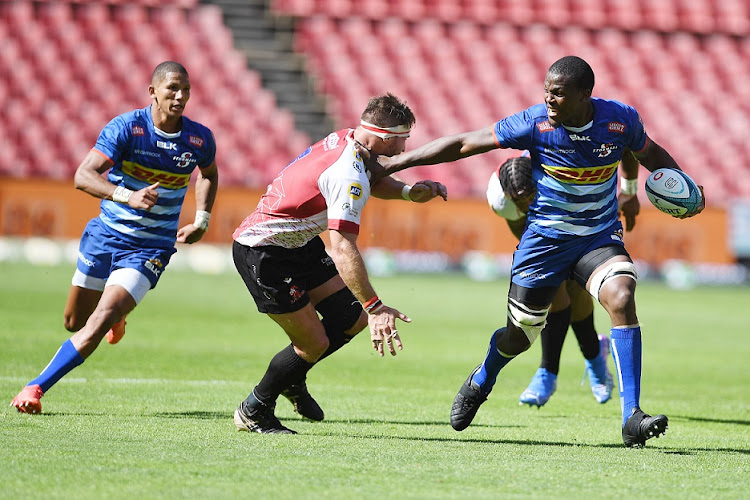 Hacjivah Dayimani was one of the star performers for the Stormers in their 32-10 win over the Lions at Ellis Park. Here he tries to fend off the attempted tackle of Lions captain Jaco Kriel.
Image: Lefty Shivambu/Gallo Images

Lions coach Ivan van Rooyen admits this may be the time to embrace change after his team suffered their fourth straight United Rugby Championship (URC) defeat on Saturday.

This time the Lions were tamed 32-10 by a Stormers team that cracked the whip whenever they needed.

The Lions are now 14th in the 16-team points table but have played more games than the Dragons and Zebre below them.

They have a week off before travelling to meet Leinster, one of European rugby’s most decorated teams.

“I don’t think it is a bad time for a bit of change whether it is player driven or how we play. It is fair to say that one of those things should change,” conceded Van Rooyen.

“There is stuff that’s improving and then there is stuff that is not. It is midway through the season and we as a coaching staff have three days off and have to reflect really hard on what works and what doesn’t.”

The Lions’ vastly experienced captain Jaco Kriel admitted it was time to step up. “I believe that we, as a group of senior players, have to support the coaching staff,” said the Bok flank.

“The last thing you need is a rift between coaches and players. That’s definitely not the case in our camp at the moment, we’re still enjoying working with each other.

“It’s important for us to remember that we have a lot of youngsters in our group and we don’t want them creeping into their shells. We’ll take their pressure on us but it’s important for the rookies to learn from experience,” said Kriel.

How Van Rooyen and Co fixes a lack of maturity and composure in a team that spurned opportunities to make advances on the scoreboard is hard to see. The Lions made seven incursions into the Stormers 22 without profiting from the leg work.

Handling errors and a general lack of accuracy in allowing poachers like Deon Fourie to stamp their mark on the game proved a source of huge frustration.

In defence too, they at times weren’t always shoulder-to-the-wheel and again their lack of authority at the breakdown served to put them on the back foot.

“Not rucking effectively forced us into scramble defence,” noted Van Rooyen. “We conceded so much turnover ball we it put our system and individuals under pressure,” said the coach before adding “there was not a considerable decline in physicality or effort.”

The Lions’ tactical kicking also lacked conviction but they will be enthused by the return from long term injury of flyhalf Jordan Hendrickse who came on as a substitute.

“Dobbo told me he felt the same after we beat them in Cape Town (in December). We have to take the positives from what is working.

“Sometimes, all you need is a lucky break. One interception to stick or not holding on for a penalty to swing the momentum and get your confidence back.”

With the next game away to the competition’s blue blood team, the Lions’ fortunes will likely get worse before it gets better.