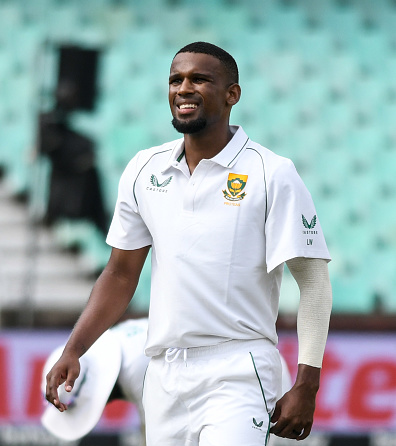 Lizaad Williams has claimed his maiden Test wicket during the morning session of day three of the first Test against Bangladesh at Kingsmead Stadium in Durban on Saturday.

His moment came during the 52nd over when Taskin Ahmed got a thick edge to gully from where he was caught on second attempt by Wiaan Mulder as he tried to drive the ball.

Bangladesh started the day under pressure with an overnight score of 98/4 with Mahmudul Hasan on 44, Ahmed yet to face a ball and still trailing SA by 269 runs.

At lunch the lunch break, Bangladesh were rebuilding their innings with a fighting score of 183/5 and Liton Das on 41 and Mahmudul approaching his century with a score of 80.

Importantly, the partnership of Das and Liton was on 82 off 169 and growing. They had reduced the deficit to 184 runs after adding 80 runs to their overnight score for the loss of one wicket.

There was disappointment on the field for SA with two dropped catches, with Dean Elgar putting down Liton and Sarel Erwee not able to hold on to a lose ball by Joy.

Sundowns troubled by injuries ahead of Champions League match