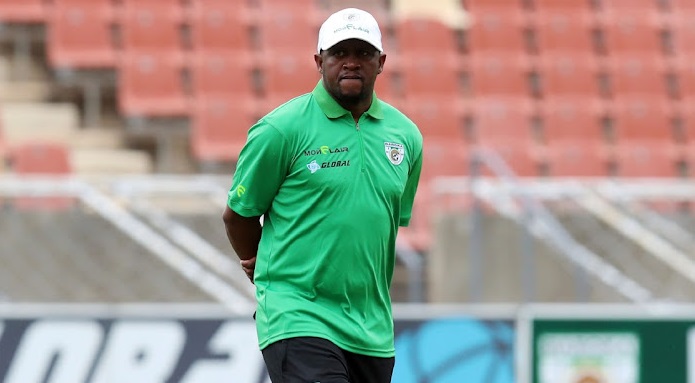 Maverick Kgoloko Thobejane’s third spell as Baroka head coach has come to an end after he was demoted to the DStv Diski Challenge.

The charismatic yet shy Thobejane has been in charge of the team in the DStv Premiership since November after taking over from Matsemela Thoka. He was roped in to help the side avoid being in a relegation dogfight.

His attempts to rescue the team have been fruitless, with the results going from bad to worse. In 20 games played, he lost 10, drew four and won two. The final nail in the coffin was the events that transpired at the Dobsonville Stadium against Swallows.

Baroka had a two-goal lead at the hour mark courtesy of goals from Sekela Sithole and Richard Mbulu. However, within two minutes Swallows were back on level terms thanks to a brace from Mwape Musonda and a late winner from Musa Nyatama.

The loss proved to be the tipping point for the Baroka management, with chair Khurishi Mphahlele deciding to demote Thobejane to the reserve team.

“We’ve made changes that show that we are very disappointed, our actions speak louder than words, ” said Mphahlele.

“He was actually doing well in the MDC, I must say. So, we’ll deploy him there again. If you look around in our province of Limpopo, he’s the best coach. He’s is the only coach in Limpopo that’s successfully promoted a team to the PSL,” he said.

Replacing Thobejane is his assistant, Vincent Kobola. This will be Kobola’s first gig as head coach after having stints as the right-hand man at Chippa United and Maritzburg United. The former defender has four games to save bottom Baroka’s top-flight status.

“He has got a bright future in terms of coaching and we will support him. We’ll give him that chance,” said Mphahlele.

“Four games is too small but he can do something. After the weekend, we are so disappointed after leading 2-0 and going to lose the match. With him, those types of things won’t happen,” he said.

‘Soldiers’ is a collection of fascinating war stories, that gains pace as you read

‘Soldiers’ is a collection of fascinating war stories, that gains pace as you read