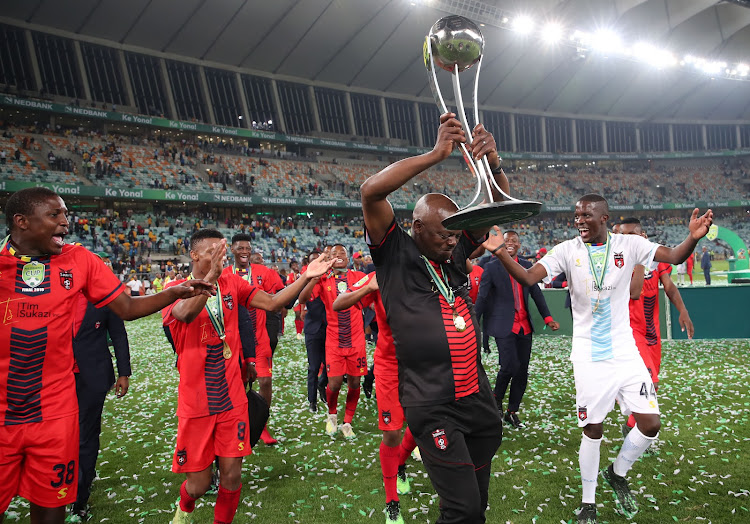 Dan Malesela has four more matches to win to lift his second Nedbank Cup trophy and one of the teams standing in his way is Orlando Pirates.
Image: Muzi Ntombela/BackpagePix

There will be at least one amateur team in the quarterfinals of the Nedbank Cup after the last 16 draw pitted ABC Motsepe League teams Summerfield Dynamos and Black Eagles against each other.

The draw on Monday produced three Premiership affairs with holders Marumo Gallants drawn at home against Orlando Pirates, Swallows at home against Royal AM while Baroka will take a bus trip to Mbombela to face 2019 winners TS Galaxy.

In-form Ivory Coast striker Sede Dion scored twice as holders Gallants cruised past Western Cape ABC Motsepe side Santos at Peter Mokaba and coach Dan Malesela will be eager to put one past a side he captained as a player.

Three-time winners SuperSport United will make the short trip to Phokeng to face off against Platinum City Rovers.

Venda Football Academy and University of Pretoria will be the only GladAfrica Championship affair while fellow first division campaigners Tshakhuma Tsha Madzivhandila will make the more than 1,000km journey to the Bizana region in the Eastern Cape where another stubborn ABC Motsepe League outfit, Sinenkani, will be waiting.

But the people who would perhaps be more excited about the draw are players from Botshabelo-based ABC Motsepe club Mathaithai, who will be chomping at the bit to test their skills against African giants and three-time winners Mamelodi Sundowns.

Sinenkani caused one of the upsets of the last 32 round.

They held their nerves  as they defeated 2018 champions Free State Stars after a 10-9 penalty shoot-out victory in Bethlehem to set up a fixture to look forward to against Sundowns.

Four months old North West ABC Motsepe club Black Eagles, who stunned Sivutsa 3-2 in extra time at Royal Bafokeng, will travel to Chatsworth for a confrontation with their KZN third-tier counterparts Summerfield Dynamos, who are coached by Clinton Larsen.

There are eight professional clubs — seven from the top division and four from the first division while Dynamos, Eagles, Mathaithai and Sinenkani are the only amateur teams left in the R7m knockout competition popular for more often than not producing David vs Goliath encounters.

The dates and venues for the last 16 round will be announced by the Premier Soccer League in the coming days.

Swallows vs Royal AM

Love on the line and online