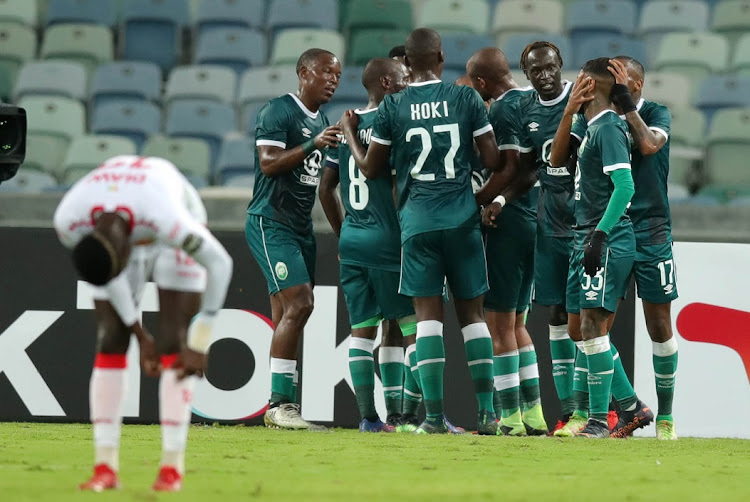 Luvuyo Memela of AmaZulu celebrates his goal with teammates in the Caf Champions League 2021-22 match against Horoya at Moses Mabhida Stadium in Durban on February 18 2022.
Image: Samuel Shivambu/BackpagePix

In spite of his team being depleted due to injuries, AmaZulu interim coach Brandon Truter is confident of a positive result in their KwaZulu-Natal derby against Maritzburg United on Saturday.

Usuthu are due to host the relegation-threatened Team of Choice in a DStv Premiership match at Moses Mabhida Stadium in Durban (3pm).

While AmaZulu are seventh on the log table, the men from the capital of the flood-hit KwaZulu-Natal are in position 12 and just five points above the automatic relegation spot.

Truter, who will be in charge of his third game since replacing the sacked Benni McCarthy at the club, heads to the Saturday clash missing a few important members of his squad.

The coach will be without his Zambian forward Augustine Mulenga, Thabo Qalinge, who got concussed in the last outing against Baroka , Luvuyo Memela, Mataar Ceesay of Gambia and Siphesihle Maduna.

“Ceesay came back with a knock from the national team. There are quite a few injuries but at least some of them are coming back now,” Truter said ahead of the clash.

The previous three derbies between the Usuthu and Maritzburg have ended in stalemates and produced only two goals which came in their 1-1 draw earlier this season.

Truter hopes to change that, but he admits it might not be that easy considering the situation the Ernst Middendorp-coached side find themselves in on the log.

“Looking at their position on the log, they are quite in danger and it’s difficult to play the teams that are in the bottom five because they are fighting for their lives,” Truter said.

“We’ve experienced that against Baroka FC and we saw in their (Baroka) game against Pirates as well how difficult it can be playing the teams that are at the bottom of the log at this time of the season.

“It’s going to be a very tough game but the boys are prepared. It’s a KZN derby and we are looking to reign in KZN. But I’m backing my boys to get the win.”

The ambitious Usuthu management wants a top four finish and if Truter gives them that, he might just boost his chances of landing the job on a permanent basis.

Truter’s tenure at the KwaZulu-Natal side is going well so far after he led them to a 1-0 win over Baroka in their last outing.

Here’s a look at nine openings, launches and releases

Here's a look at nine openings, launches and releases