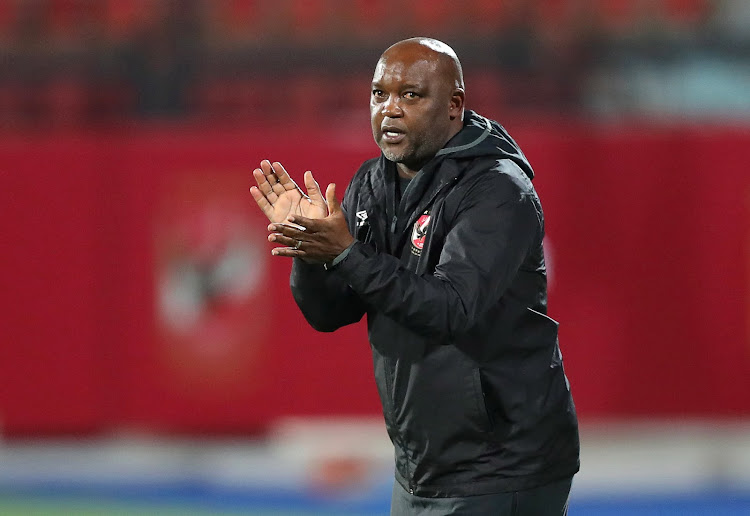 Al Ahly coach Pitso Mosimane has cheekily suggested that Mamelodi Sundowns have had a kind fixture schedule compared to his Red Devils as the two sides prepare to lock horns once again in the Caf Champions League.

Sundowns host the Egyptian giants in a hugely anticipated group stage clash at FNB Stadium in Soweto at 3pm.

Masandwana head to the meeting on the back of a 6-0 Nedbank Cup victory over ABC Motsepe League amateur outfit Mathaithai on Tuesday, where the Brazilians fielded a number of fringe players.

Mosimane and his troops arrived in the country on Wednesday after a long trip on the back of their Egyptian Premier League top-of-the-table battle against Pyramids on Tuesday.

“Preparations have not been very easy, I think you know that we played Al-Merrikh (on Saturday, March 5) and within three days we had to play Pyramids which was the top of the class game,” Mosimane said.

“We had to put everybody in the line-up because we wanted to win. And compared to our opponents (Sundowns), I don’t know who they played, I don’t even know the name of the team (Mathaithai) in the Nedbank Cup. You know the line-up there.

“We are in a difficult situation of these three (tough) games in about eight or nine days. And it’s not only about those three games in nine days, also put a 10-hour flight to come over here and then travel from Cairo at 2 o’clock to refill in Aswan for one hour and leave Aswan at 4am to land here (in SA),” he said.

The stakes are high in the game, not only because both teams are determined to go to the next round.

Ahly are seeking revenge after Downs defeated them 1-0 in Cairo two weeks ago, a first-ever victory for the SA side against Ahly in the city.

“Sundowns had better preparation, they were in Cairo for seven days but that’s not an excuse. It’s just the way it is and if I was in the position of Sundowns I would do the same, to be honest,” Mosimane said.

The coach also thanked Kaizer Chiefs, who they defeated 3-0 in last year’s Champions League climax, for making their world-class training facilities available for them to use ahead of the showdown with Sundowns.

“It’s fair but it has been difficult for us to do that. We had one day to prepare and thanks to Kaizer Chiefs, to the chairman of the club Kaizer Motaung for offering us the facilities where we couldn’t find any other facility in the country that has a pitch, cryotherapy for ice bath for massages, the pool and saunas.”

After three games, Sundowns are top of the Group A log table with seven points while Ahly are second with four points.

Al-Hilal and Al-Merrikh are also on four points but they’ve played more games than the top two teams.